Posted by Bronwyn Eastley on September 22, 2010
Here's just a snippet of some of my favourite photos from the 300+ that I took of my trip to Bali. Enjoy! Me, with Menik and Dora, two of the girls from the orphanage that made Lis and I feel right at home. 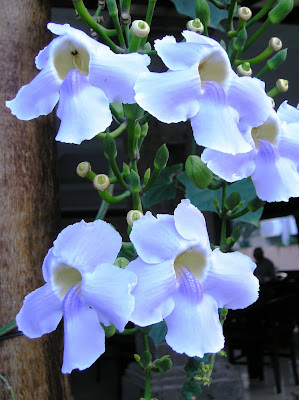 Some of the beautiful flowers in the grounds of the first hotel we stayed at on our arrival in Bali. 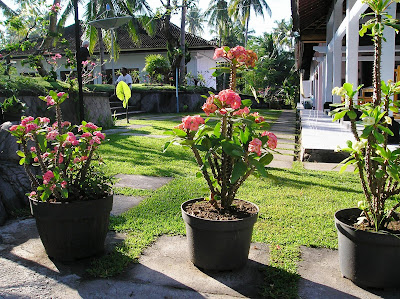 The grounds of the orphanage which has had a major re-vamp thanks to a dedicated gardener amongst the staff. 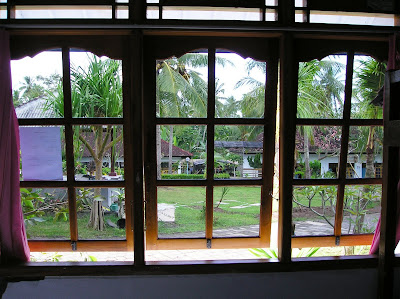 The view from one of the girls' dormitories. 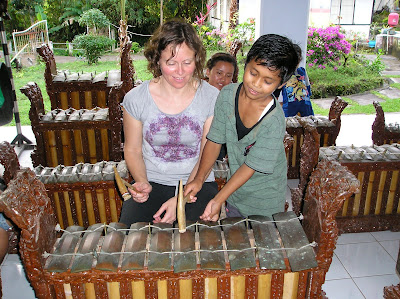 Idi teaching Lis how to play the Gamelan. 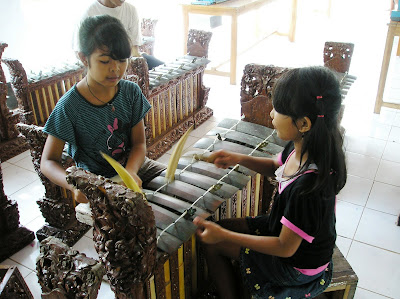 Having fun with the instruments. The Gamelan is usually just for boys. 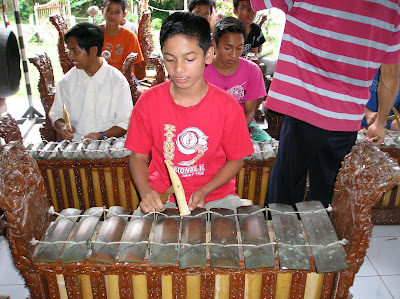 We watched Gamelan practice three times over the course of the week! 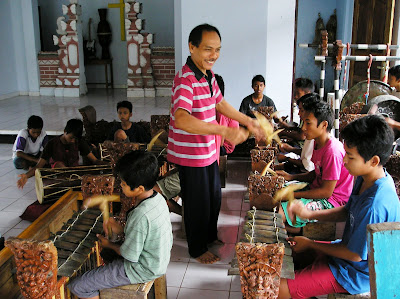 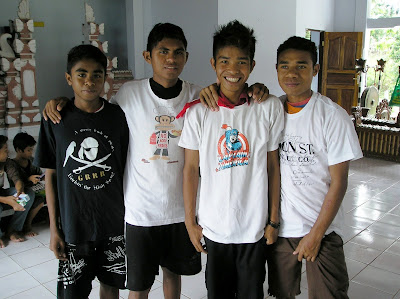 My son, Ryan, donated some T Shirts. Here are the four boys who received them. They were asked some trivia questions in order to 'earn' them from the leader of the orphanage. It was all in Indonesian so I didn't understand much of the 'process' but the boys who 'won' were pretty chuffed with their prize! 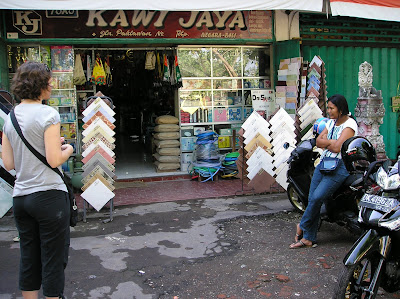 The guys on the team spent ages in the local hardware store at Negara getting supplies for two of the orphanages. Here's Lis and Komang waiting patiently outside in the heat! We were able to get some 'payback' when we hit the markets a couple of days later in West Bali. 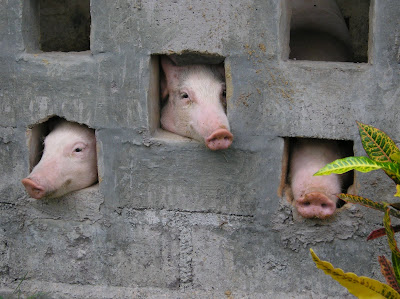 I just love this shot of the pigs in the pen at the orphange. They don't have names because one of them will be Christmas dinner. 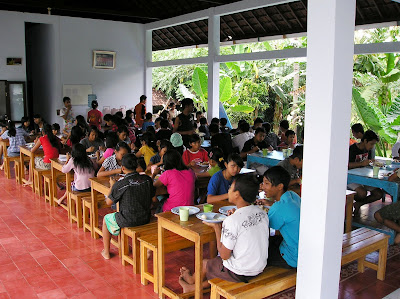 Tea Time at the Orphanage


I hope you enjoyed having a browse through the first lot of photos. I had better go and dish tea before I upload another post. Rest assured rice is not on the menu at our place tonight!

Tania Gould said…
WOW stunning pics!!! The children seem happy and it is definitly a beautiful place to be! Thanks for showing them!
September 22, 2010 at 8:01 PM

Patrice said…
Thanks for sharing your fabulous pics Bron. Beautiful weather, gorgeous flowers and lovely to have glimpses of the children and orphanage. Look forward to lots more in the coming days.
September 22, 2010 at 8:55 PM

Christine Blain said…
Beautiful pics - made me feel like I was right there (minus all the sweaty heat! LOL). Looks like you had a great trip, Bron.
September 23, 2010 at 8:12 AM

Jo said…
Great photos Bron. The kids look really happy and the orphanage looks bright and airy. The gardens look beautiful too.
September 23, 2010 at 10:02 AM

Marisa said…
What a fabulous trip! Thanks for sharing the pictures! LOVE the one of the pigs LOL!
September 25, 2010 at 1:08 AM

Leonie said…
Thank you for sharing some snippits of your trip, it looks like you have had an amazing adventure!
September 27, 2010 at 9:31 PM 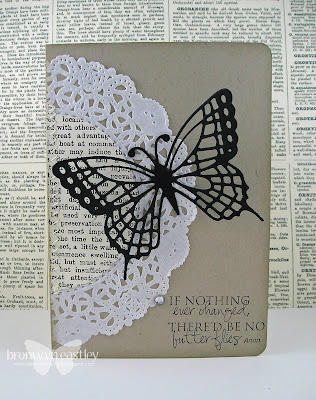 I was going a little stir crazy so decided to end my 'blog fasting' today. I lasted 2 weeks which isn't the entire month of March that I was aiming for but I have severely cut down my Internet usage and spent my 'free' time getting my priorities a little more in order :) Here are some doily cards I wanted to share with you on this beautiful March Long Weekend Holiday. Inspiration came from a very CAS Card I found through Pinterest. For a Stampin' Up! ® version of this card, please check out what I made using the Butterfly Basics Stamp Set and co-ordinating die. Butterfly Die - Marianne Creatables (Thanks to Lisa Lara at Splitcoast for recognising this card as a CAS favourite for the week) Newsprint Bird - Hero Arts Gorgeous DSP from First Edition Paper - Isabelle Flowers from Kaiser Craft Sentiments from STAMP-IT Leaf Flourish - Marianne Creatables Stamps - SU Bird Die - Sizzix Oval Frame Bird and Pendant Stamps- Hero A 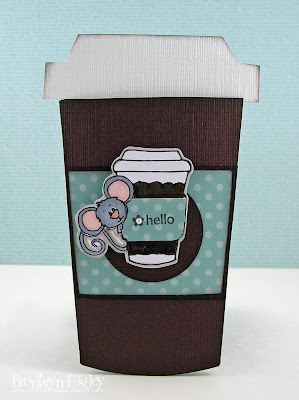 I spied a cute coffee tumbler card on Pinterest and went and followed the link to purchase the template. Here's what I came up with after a little afternoon of crafting on my day off - The cute digi image is from Sweet 'n' Sassy... ... and I used a very old SU stamp set called, 'Like it a Latte" for the insert. Colours used - Early Espresso, Whisper White and Baja Breeze 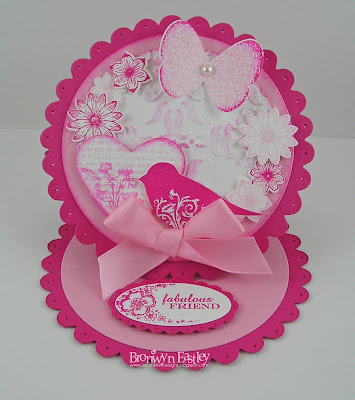 Punch Potpourri Scallop Circle Easel Card in the Dynamic Duo of Melon Mambo and Pretty in Pink 1. Score a piece of card stock through the middle (which is double the length of your die) and line up the folded piece over the Scallop Circle Die (SCD) leaving 4 scallops at the top to form the base of your card. This is how it should look after you run it through the Big Shot Machine . 2. Score a line through the middle of the top Scallop Circle and fold upwards. 3. Apply Sticky Strip or glue to half the Scallop Circle as shown above. 4. Cut out a single Scallop Circle in the same colour (Melon Mambo) and stick it to the folded half so the top layer sits up like an easel (The top half that is facing will now be a double layer and the bottom half, a single layer of card stock). 5. Cut two circles using the lighter shade (Pretty In Pink) and attach one to the base of the card. Sponge around the edges with the darker shade of ink before gluing the other circle to the